The results are in from Bradley’s 2018 Healthy Hand Washing Survey. The annual survey polled 1,035 adults as states across the country were reporting growing numbers of flu cases. Nearly 60% of Americansare extremely or quite concerned about contracting a new or particularly resilient strain of the flu this year.

While the flu is widespread, the survey reveals that Southerners are more worried about catching it than adults in the Northeast, Midwest or West. 34% of those in southern states are extremely concerned compared to 23% who feel that way in the three other regions of the U.S.

According to medical experts, the best defense against sickness is to ramp up hand washing. Fortunately, Americans are heeding that advice. 61% of respondents make it a point to suds up more frequently to avoid getting germs or passing them on to others.

“Hand washing with warm water and soap is a simple and effective way to reduce the risk of contracting viral infections like the flu or the common cold,” says medical microbiologist Michael P. McCann, Ph.D., professor of biology, Saint Joseph's University. “Getting the virus on your hands and then touching your eyes, nose or mouth is a common way people become infected so effective hand washing can reduce that risk.”


In addition to increased hand washing, the survey found Americans try to fend off colds and the flu by supporting their overall wellbeing. 53% increase their fluid intake, 47% take vitamin C or a preventative supplement and 40% try to get more sleep. 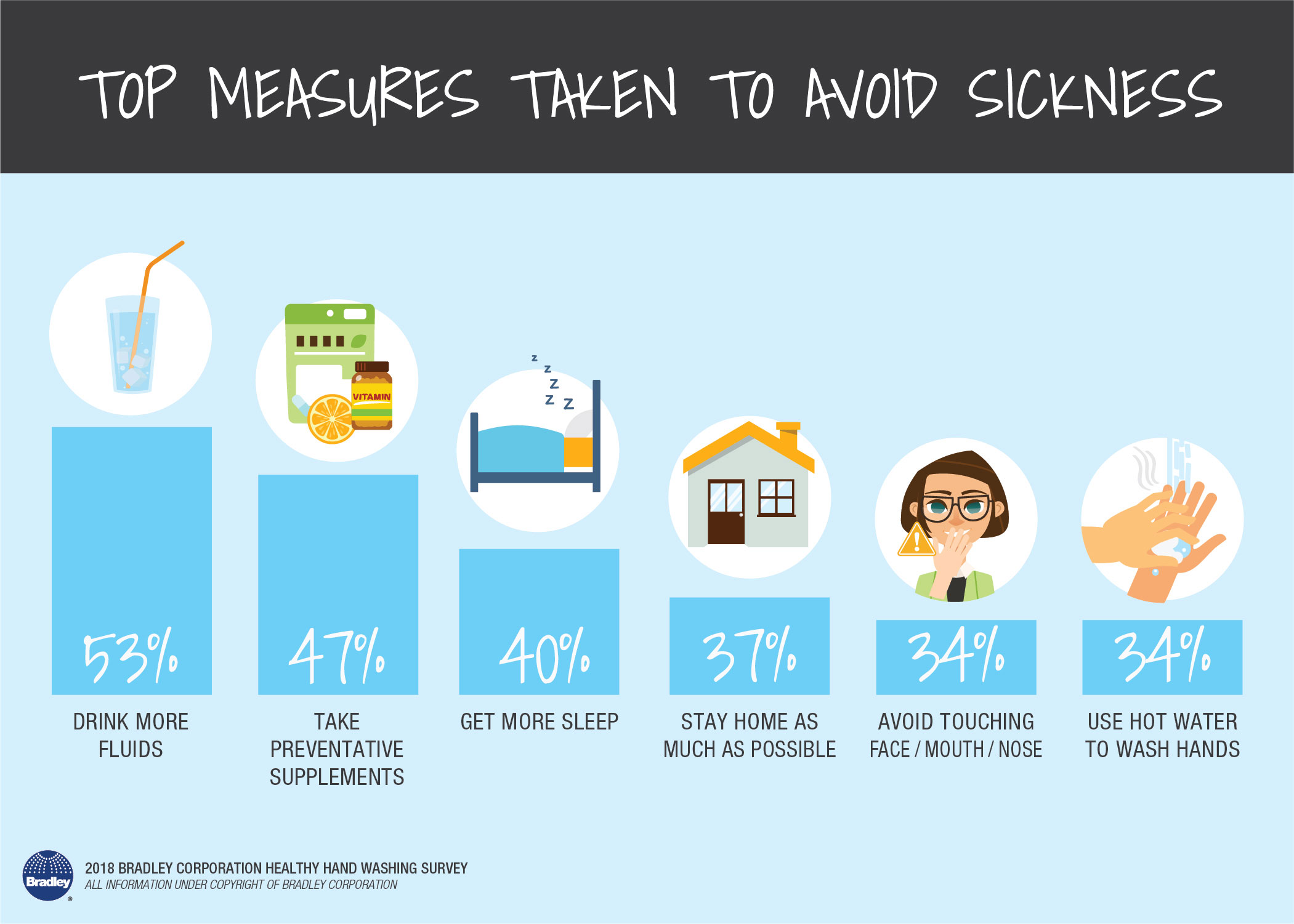 On the home front, nearly 80% escalate their cleaning and sanitizing. If a family member is sick or a bug is going around, they proactively wipe down bathroom surfaces, wash sheets and/or towels and clean kitchen surfaces.

That’s a good practice since Dr. McCann says cold and flu viruses can persist on solid surfaces like sinks, countertops, doorknobs and phones for about a day.

The survey also found that, while 56% stay home when they’re sick, those who are ill change the way they greet people. 51% wave hello. Others simply avoid shaking hands and some utilize a fist bump or air kiss instead. 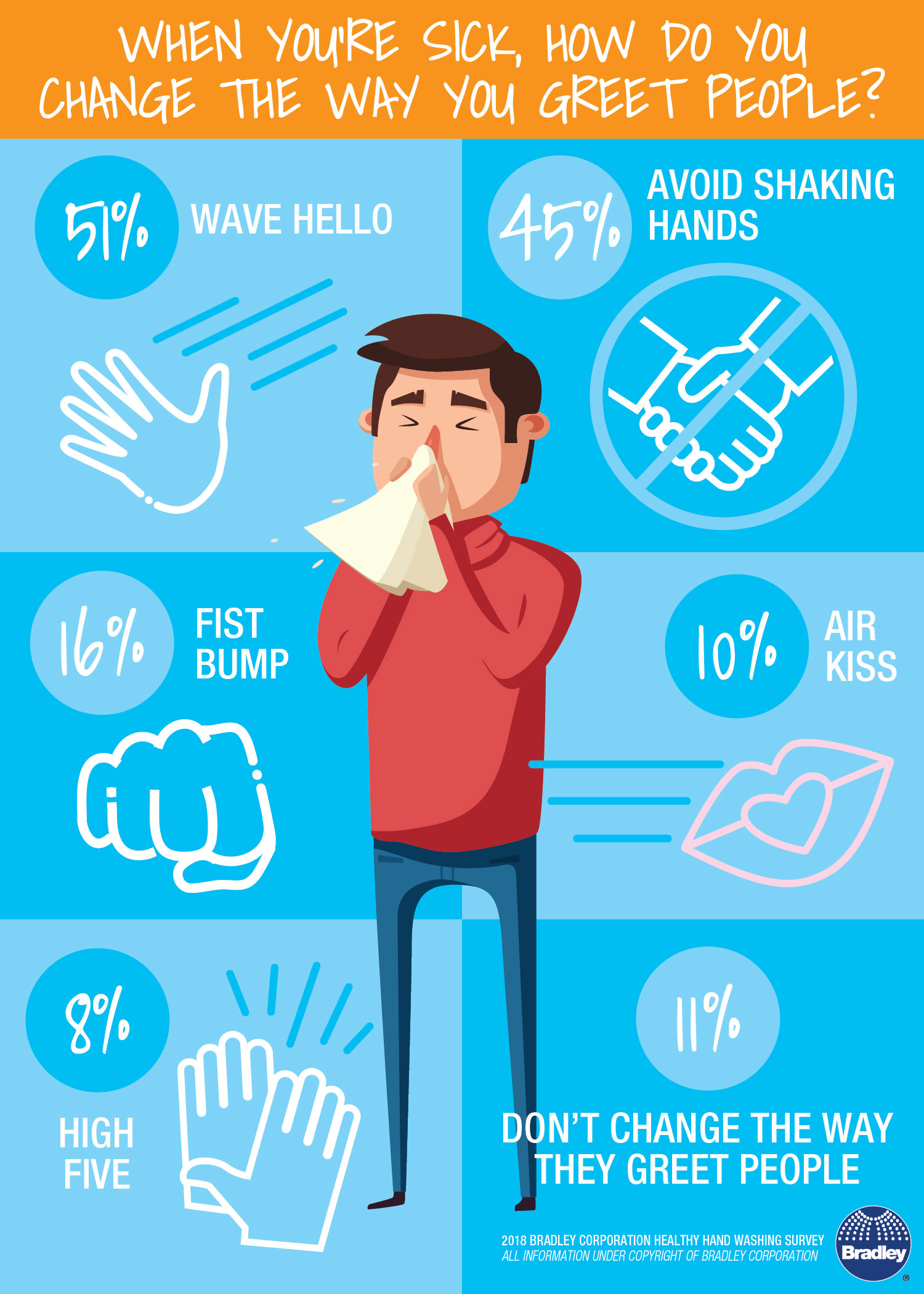 “These statistics point to an increasing number of people who aren’t cleaning their hands when they’re in public places,” says Jon Dommisse, director of strategy and corporate development for Bradley Corp. “No matter where you are – at home, at work or out-and-about – hand washing is a must, especially this time of year. Diligent washing with soap and water is a simple and effective way to remove sickness-causing germs and bacteria that we’re exposed to throughout the day.” 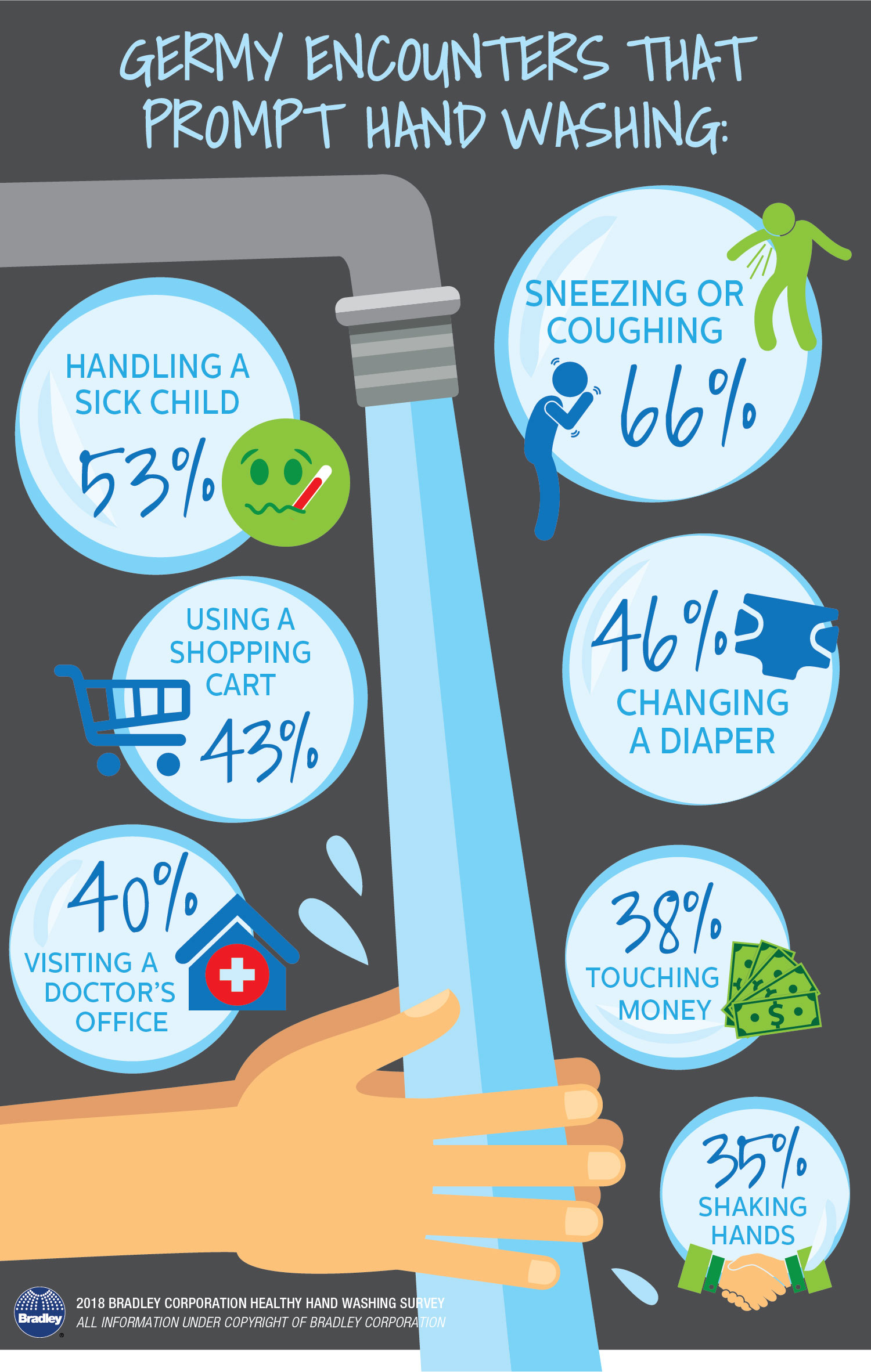 Pay to Use a Public Toilet? Many Americans Say They Would

While pay toilets aren't common in the United States, 56% of Americans say they'd consider paying as long as they were guaranteed a clean, well-stocked public restroom. How much, you ask? 45% would drop a quarter, 29% would part with up to 50 cents, and 6% are big spenders who'd shell out more than $1. 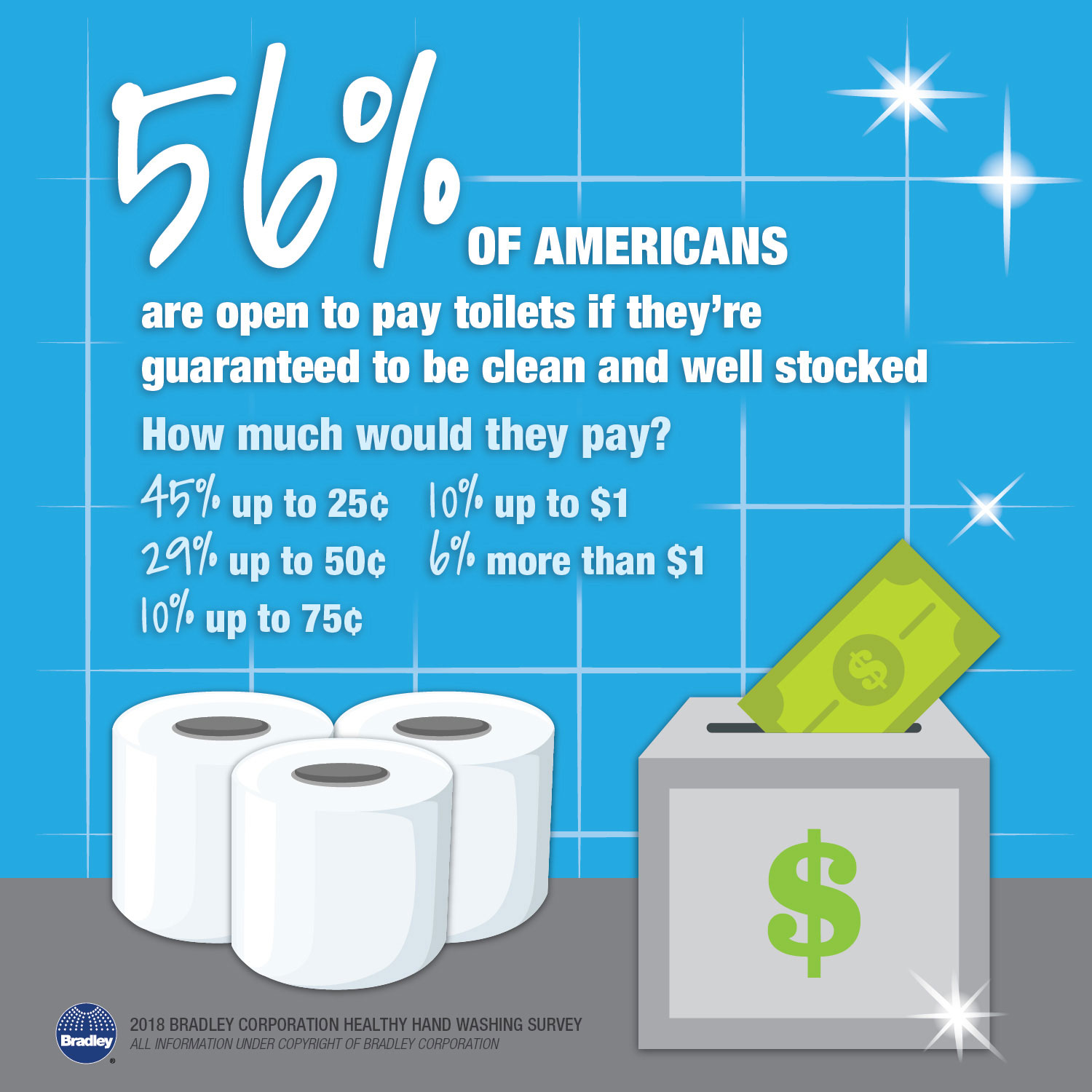 There is a group who isn't too keen on the payment idea. Call it what you like – Midwestern practicality or frugality – but nearly one-third of Midwesterners say they definitely would not pay to use a premium public toilet.

The survey also revealed a lack of knowledge. 47% of Americans didn't know that in some countries pay toilets are a common practice. Actually, until 40 years ago, pay toilets were found throughout the United States.

Putting out some cash in exchange for cleanliness and plenty of toilet paper might not be a bad thing since 70% of Americans say they've had a particularly unpleasant experience in a public restroom due to the condition of the facilities. In fact, 42% report having a bad experience within just the past two months.

Respondents readily shared a list of things that get them riled up. Clogged or unflushed toilets; toilet paper dispensers that are jammed or empty; and partition doors that don't latch are the biggest irritants.

When asked what improvements they'd liek to see, the top requests were: keep restrooms cleaner and ensure they're adequately stocked with toilet paper, paper towels and soap.

The annual survey queried 1,035 American adults online Jan. 2-5, 2018, about their hand washing habits in public restrooms and concerns about germs, colds and the flu. Participants were from around the country, were 18 years and older, and were fairly evenly split between men and women (49 and 51 percent).